This is just a sort of funny post this week about what I think is interesting and what others actually think is interesting. I love Pinterest and have 38 different boards. It’s a great place for me to put all my writing efforts, boards for my books and then the multitude of other things that interest me greatly – most of which have to do with food, inspiration, holiday inspired food, clothes, food for my favorite book characters, magical and haunted places, and more food (see a pattern here?)

But what has been the single number one pin that has been getting a lot of repins and likes recently? This one appetizer I pinned once. And yes, it has to do with food and no, I haven’t made it yet, but plan to! Easy Ham and Dill Pickle Appetizer Bites. To be honest, at first I wasn’t so sure it would be good. I mean, it’s just ham, cream cheese and a dill pickle. It seemed “too easy” but I’ve read the reviews about it and people seem to love it. What do you think? Would you make it? Here is a link to the pin, which will link you to the recipe if you’d like to try it! https://www.pinterest.com/pin/76139049921284996/

Do you use Pinterest? And, if so, what do you use it for? I’d love to hear how it works for you.

So, what does that mean? I’m a YA novelist, right? Well, no. I actually define myself as an adult thriller/horror writer, if asked. Those YA books I had mostly written years ago and had the opportunity to publish them first. Since then, the books that I’ve put out are all adult thrillers or horror.

There’s the Kelsey Porter series which are sexy buddhist thrillers, and two horror novels. The pitfalls of writing cross genre is that some of my YA fans have picked up the thrillers and been… well… surprised. The YA books were very clean… albeit a bit violent as I tend to write that way, but they weren’t adult books. As a result, I’ve had to caveat to a lot of people whether or not their children can read any of my other books. Usually I tell them “no.” Not that it’s erotica – it’s not at all, and not that they’re dirty, they’re not, but they have adult themes and are just not what I’d picture a kid could read.

That said, my daughter read my horror novels just fine at the age of thirteen and my fourteen year old son wishes to read THE HUNT FOR XANADU. I think he’s two years too young, but he’s adamant so we discuss it chapter by chapter. Books #2 and #3 in the series are “more tame” to be honest. But there’s a reason I set up Book #1 the way I did. You’d have to read it to find out or it would be a huge spoiler. 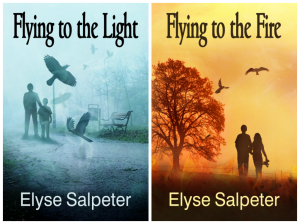 I find I’m getting mostly fans now with my adult books, but then these same people will go back to read my YA books and I wonder if they get confused or upset? They are all so different and you wonder if the pitfalls of writing cross genre means you confuse your readers if they wish to read other works by you, thinking they’ll be similar. That said, I would just advise authors to make sure you’re very clear in the book blurbs what the books are about and what genre it is so there are no surprises.

On my webpage at www.elysesalpeter.com I have headers for all the genres, and hope that makes it more clear for people.

As to the “publishing wrong” comments? Well, not much I can do about that. I write what I write, when I write it. It’s how my brain works. But I don’t think the cross genre is a bad thing. I actually write in one genre, but across different age groups. All my books have a fantastical element to them. In the FLYING SERIES it was the young boy who knew about the afterlife, in the NA WORLD OF KAROV Dark Fantasy Series, it was an evil spreading across the universe, in the KELSEY PORTER series, they’re adult Buddhist Spiritual Mysteries. I was just lucky enough that a publishing house picked one of them up and it just morphed from there. When you have an arsenal of books in your library waiting to get out to the world, do you just let them sit there because you want to be a specialist in one genre or the other, or do you let them be free? I decided to publish them all and let the chips fall as they may.

A collection of creepy horror tales…

Anyone else write cross genre? Do you as a reader find it confusing when an author mixes things up in this fashion or do you like it? Love to hear.

If you’d like to check out all the novels, here’s my amazon author page: http://amzn.to/1NiXfjT

So, Book #3 in the Kelsey Porter series launched. Right before this I decided to try out the new Amazon giveaway for Book #2. I’ll be honest, most times trying to get people to enter giveaways is so hard, that I wonder if it’s even worth it to do them.

I’ve done Goodreads giveaways and gotten possibly 600 people to enter. I’ve done FB, instagram and twitter giveaways and maybe 20 come in. This give-away you can pick how you want it to run. I gave away five books with a one in ten chance. I thought it would take all day for this to go. I put it out on twitter, Facebook, google+ and by the time it hit my newsletter folks, the giveaway was already over!

Yes, over. And here’s what’s weird. Four of the people that won were “A” names, the last name I couldn’t even pronounce, and I knew none of them. You’d think if I were first promoting to my own people, I’d know at least one of the winners, but I didn’t.

Next time I do this I’ll do a 1 in 100 chance to win. (or 1 in 300) As of now, I basically only engaged 50 people in this. Not efficient at all, and I had to pay for five ebooks, full price. (yes, I’ll get the royalties, and yes, it helped in my rankings for a spell, but it was roughly $20 for what seemed like a five minute giveaway and not even one review from it.)

I just thought I’d share my experience. Definitely something I’d do again, but I’d up the amount of people that need to enter to win the books, and play around with how many books to give away. I think the sweet spot is at least 500 entrants. Worst thing that happens is people don’t enter and you have a few books leftover you simply can gift to other people. They’re ebooks, so it’s not like the outlay is that huge.

Have you done one to great success? Love to hear.