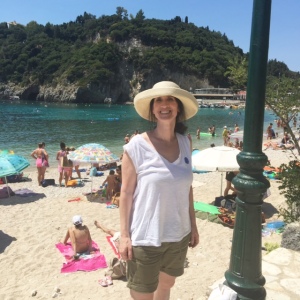 On a beach in Corfu, Greece

Hey folks! It’s been about five weeks on paleo. I’ve been pretty darn compliant, except when I went to Italy for about 10 days. I admit to having pasta two times (I mean, there is no way I’m going to Italy and not having their pasta) and I was terribly queasy on the ship, so I also had some small scoops of rice occasionally, but overall, I’ve tried to stick to the program all the rest of the time. I would say I’ve been 90% compliant and now a week home and pretty close to 100%.

I have good news. The inflammation around my L4/L5 herniations is gone. I was suffering from sciatica and that has ceased. Not eating dairy, breads, white flour and tons of sugar I truly believe has been the guiding factor here. 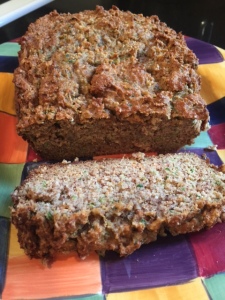 Zucchini Carrot Bread made with almond and coconut flour

Bad news? I feel like I’m still suffering from “carb flu.” You know, headaches, lack of energy, being exhausted all the time. At the same time, I’ve lost 4 lbs. I’m not sure if it’s from actually not eating enough, or being seasick on the ship. I think I’ll know more in a few weeks.

I “think” I’m seeing a turning point. I did sleep well last night and I did get up energized enough this morning to go for a 1.5 mile SLOW jog and do 100 sit-ups. Baby steps for me, but I’ll take it. Will continue with the plan because with inflammation causing so much pain, I’m very happy to be able to drop something on the floor and bend down and pick it up without an issue. I used to drop my sock on the floor and just cry… thinking “it was so far away.”

Just astounding tile work at the Ruins of Nora in Cagliari.

As you know, I love to cook and be accountable, so I made an instagram account of paleo recipes I’ve tried. Feel free to follow me there at @paleoinspired_

Love to hear if you have any issues with this, what you think and if it’s the “be all, end all.” I’m still working that out.

P.S. That zucchini bread above looked great – but what a strange texture. Hence, no recipe. Still playing around with recipes. Please feel free to share any recipes for baked goods that actually taste good. I did make a cherry pie with almond flour that went over really well. 🙂

Just cooking up some cauliflower rice!

About six years ago, I herniated my L4/L5 doing a pretty aggressive bootcamp exercise (let’s just say doing jumping jacks with a heavy bar over my head is not any part of my future plans). Add in being over 45 years old at the time, and I was ripe for a big injury and a boatload of pain. In fact, I suffer from inflammation and the inflamed muscles would press on those nerves surrounding the injury, sending sciatica pain down my legs. For nearly two years I was unable to really even exercise.

Fast forward five years later and I’m a lot better, though not perfect. I’ve spent the past few years strengthening my core, getting back into shape and now I can jog 3 miles at a time and do yoga a few times a week. But, I’m still plagued with inflammation issues. You know the drill, swollen belly, aches and pains at the injury site.

Last July I cut all artificial sweeteners in my coffee and that made a drastic difference. Three weeks after doing that, I was able to do burpees. (something I was never able to do before and here’s a good video example from Bowflex). I’d drop something on the floor and just cry that it was “so far away.” The idea of bending was horrific. Now, I’m 1000X better. But I could be even better. So that’s why I started Paleo.

I was never a big bread eater to begin with and I have a lactose intolerance, so this diet appeals to me. I love bacon. I love steak. I love vegetables. What could be bad? I do miss the pasta and rice, but this “diet” allows a few cheats in moderation a week, so I had a piece of birthday pie, and had a soup and didn’t freak that there were beans in it. 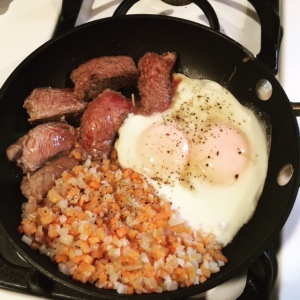 This diet has been easy and pretty clear cut. No grains, no legumes, no dairy. There’s a few other things to watch out for, but this is a great start for me. With a wee bit of planning, I have food in the house to keep me stocked and I simply modify my meals so they are paleo compliant.The trick has been to keep myself filled and to actually have “fat” at night so I stay filled, so at the dreaded 10:00 PM I don’t go downstairs and raid the refrigerator. I’ve not snacked at night for over a week and a cup of water helps me to sway those old bad habits.

I’ve made a few mistakes along the way so far. Adding some corn to a salad, which I learned was a no no, or adding a dressing to a compliant salad, and learned it had yogurt in it. I try not to freak about it and know that I’ve done my best. Everything is a learning experience and so far, just removing dairy (well, most of it) and grains has already reduced my inflammation and the sciatica pain I was experiencing recently has ceased again. I haven’t lost any weight yet, but I’m hopeful that will be an added benefit at some point.

Love to hear how you are doing on your own dieting or paleo journey.